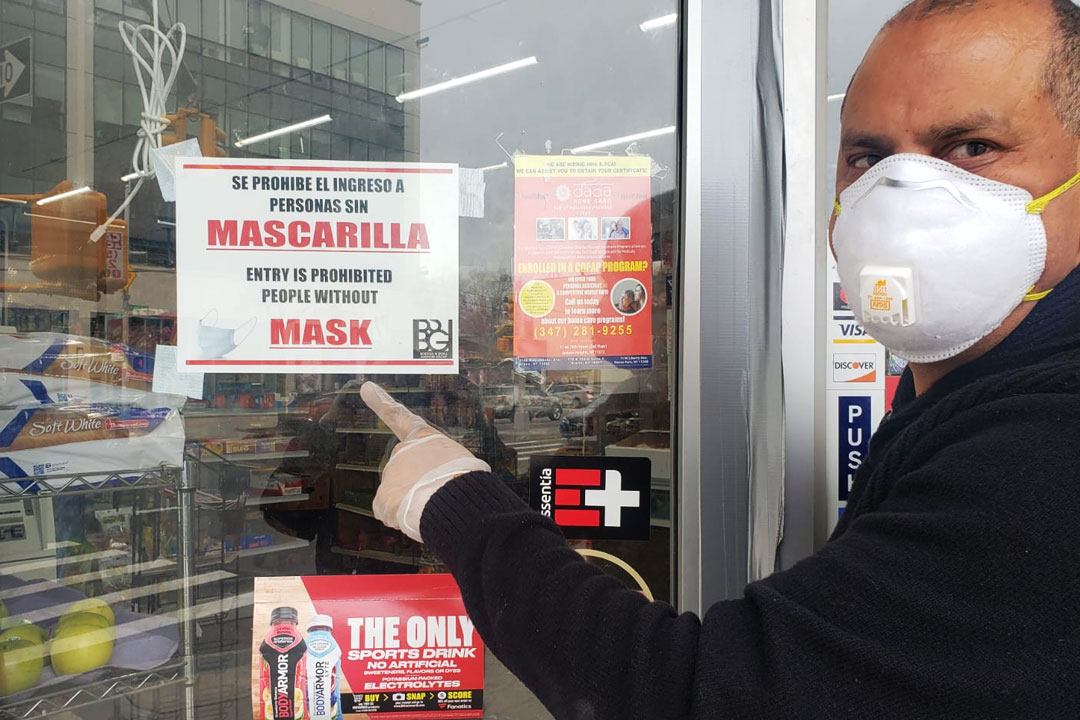 Francisco Marte owned his first Bronx bodega in the early 1990s when he was only 19 years old. He recalls going through uncertainty of how his shop would survive after big companies started coming into the neighborhood, which raised rents for bodegas and barbershops in the Bronx.

Marte, now 50, is the founder of the Bodega and Small Business Association of New York and is an advocate for those in need in the South Bronx. The threat of COVID-19 is making bodega owners feel uncertain again and stopping residents from shopping at stores.

Marte says he is focusing on helping small businesses survive and providing essentials to those in need.

He owns Green Earth Food Corp. on Webster Ave., which is seeing a decline in sales during the pandemic like many bodegas in the Bronx.

“We want people to know they are not alone,” Marte said, speaking on behalf of his association. “We are trying to help each other. We care for them and we want to do the most for them.”

More than 1,000 small businesses are covered by the association. None of them have

been forced to shut since the start of the pandemic, Marte said, but he predicted that the overwhelming financial effects from COVID-19 will force some stores to close.

He has received at least five phone calls from owners wondering if their stores will remain open. Many owners are reporting sharp declines in customers and sales because customers are afraid of getting the virus.

Vivian Santos, owner of Vivi Deli Food Mart in Little Italy, is one of those experiencing struggles during the pandemic. In addition to coping with struggling sales, she had to turn day-to-day operations at the store over to her brother while she recovered from COVID-19.

He founded the small business association in 2018, following the death of Ramon Murphy, who was president of the Bodega Association of the United States. Marte had been a member of that group for 20 years and was its secretary. Marte restructured the group, adding barbershops and salons to ensure all small businesses received the proper support they needed.

Marte moved to the Bronx from the Dominican Republic 34 years ago.  His passion for small businesses is evident, even over a phone line, whenever he speaks about protecting and advancing bodegas throughout the Bronx.

He is an enthusiast for the My Bodega Online app, a free mobile application launched to help New Yorkers get groceries during the pandemic. The app also helps bodega owners manage online orders and deliver food to nearby residents.

Mo’s Gourmet, Iron Grill and Jaivery Deli Grocery are stores in the Mott Haven and Hunts Point neighborhoods that utilize the app. Customers can choose from the store’s inventory and can check out using their credit card.

“My Bodega Online helps a little more,” Marte said. “My store is by two schools that are closed now. A lot of bodegas have this same situation.”

Jose Bello, CEO of the online app, says he has known Marte for five years and that he has always been a leader, especially during the COVID-19 pandemic.

“Francisco is more of a quiet leader,” Bello said. “He is humble. I love his personality and he is easy to mingle with. It is difficult to run a business and be an advocate. And he is great with that.”

Since the beginning of the pandemic, Marte has been working to distribute signs that indicate masks are needed to enter stores in several Bronx neighborhoods, like Mott Haven and Hunts Point. Marte says owners have told him some customers had been entering their stores without any masks before they posted the signs.

He also has distributed masks to owners in the Bronx and has talked to NYC Council Member Mark Gjonaj about making Bronx bodegas an official site to distribute masks to residents.

“The people are afraid,” Marte says. “They are afraid of people that come out with no masks. Gjonaj said he will see what he can do. Bodegas are the best place to do that duty.”

Marte also speaks with City Council members about the importance of passing the Small Business Jobs Survival Act, introduced in March 2018.  The bill would establish conditions and requirements for commercial lease renewal negotiations. If passed, renewal leases will have limits on security deposits and will not allow rent for business owners to exceed set amounts.

Marte said the legislation is needed now more than ever, since many owners will struggle to pay their rent with a decrease in business due to COVID-19.

“Now we are proving how important small businesses are,” Marte said. “When things happen, we stay and risk our lives to help keep the city running. That is why we need the bill to protect us.”

Marte also works with organizations to provide essentials to residents in need. Recently, he teamed up with Uplift NYC to buy and deliver groceries to working-class families, people of color and immigrant communities in Washington Heights.  They plan to make deliveries to the South Bronx in the near future.

Bello and Marte also have plans to deliver sandwiches to hospitals around the Bronx, including Lincoln Hospital in Mott Haven.

“I am not doing this for personal gain,” Marte said. “I am focused on the survival of small businesses.”