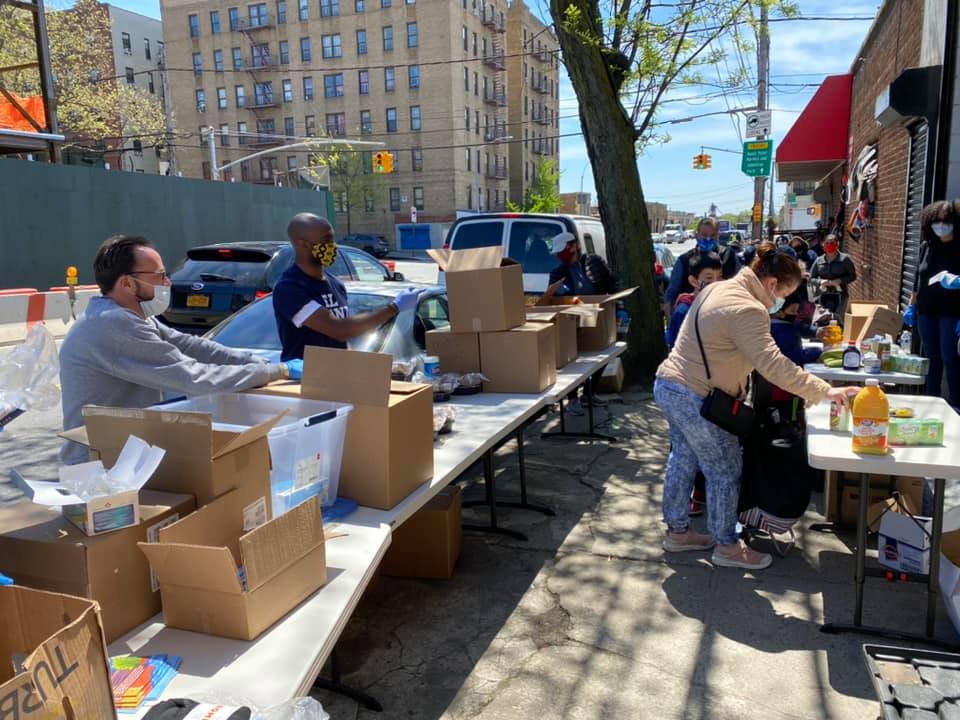 Every Tuesday begins the same way for Pastor Reggie Stutzman.

He arrives at the Prodigal Center in Hunts Point at 9 a.m, two hours before they are set to open. On one particular Tuesday, he arrived to find a woman who had been waiting since 7:30 a.m to get food for her family. She received a few of the 700-plus meals given out that day.

“As a pastor, you think ‘I’ll just build a church.’ But when you see that there are people that are

really hurting, you see that this is why we are here,” said Stutzman.

Pastor Stutzman, along with his wife, Ibelsa, and a handful of volunteers, has been providing food to those in need at the Prodigal Center every Tuesday from 11 a.m. to 2 p.m. since the beginning of the COVID-19 pandemic. People seeking food are not asked to provide any ID or any other form of documentation.

The pantry has been open for three years, but it is now more crucial to the community than ever.

“When you hear people crying as they get their food, when you hear the gratitude of people, it accentuates that this is why we are here,” said the pastor.

Volunteers at the Prodigal Center have been taking precautions to keep all parties as safe as possible. They all wear gloves and masks. They make sure to keep six feet apart and they place the food on a table so people who need it can place it themselves into their own bags. They have also provided masks to community members.

“Everyone is affected. I didn’t want to focus on myself, I wanted to focus on others so they realize that they are not alone,” said Ibelsa Stutzman, who serves as executive director of outreach for the center. “I’d rather serve people and be at risk, and know I’m helping than to be at home doing nothing.”

Before the pandemic began, the Prodigal Center was giving out about 300 meals in a week. Now that has grown to 700-800 meals. Even with all the risks involved, the Stutzmans say they feel the need to serve the Hunts Point community through their faith in God.

“I want to be faithful to the Lord’s calling. It’s my life’s purpose. I’ve been through painful days. I’ve had a lot of days of wanting to throw in the towel, but I am confident that God has weathered storms.” said Stutzman, known to his parishioners as Pastor Reggie.

Ibelsa Stutzman shares the sentiment. “To know I am able to be the hands and feet of Jesus, I am going to do that and give back to someone who needs more.”

The Stutzmans have been involved in compassionate care for over 20 years. Before the Prodigal Center existed, they created other ways to help the community, beginning with handing out Thanksgiving meals, offering free clothing and free toiletries to community residents.

“There are people out there with no food. The pandemic is something that has pushed them over the edge,” said Pastor Stutzman.  “The needs of the community are growing. We can only do with what we have. There’s too many people and not enough food.”

The Prodigal Center gets help from United Way and from funds available to Assemblyman Michael Blake, but the Stutzmans note that more money is needed.

Even through this difficult time, though, the pastor sees a silver lining.

“I think it’s bringing people together like never before. Even behind our masks and gloves, I think we have a more compassionate side for others now. We are realizing who and what we have now, even with the questions that lie ahead of us.